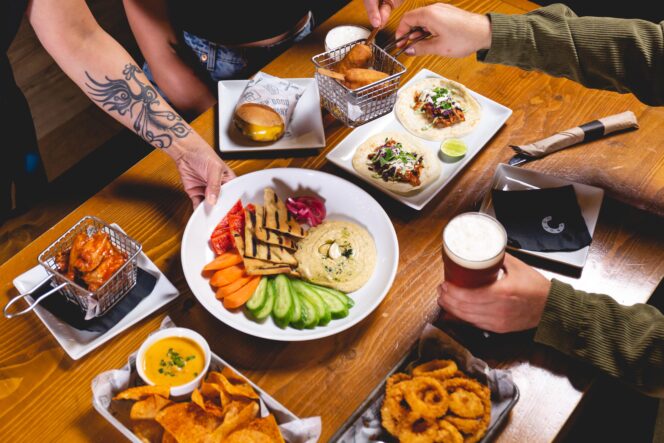 The city’s craft beer scene has really exploded over the last decade, with consumer interest and sales burgeoning as well. According to the Government of B.C., approximately 80% of the province’s breweries are smaller scale, with many of them located in Vancouver.

Vancouver has numerous establishments where you can sample their in-house beer, as well as the plethora of others produced locally. These establishments also serve scrumptious bites that have elevated our conception of food for pairing with beer. During the pandemic, delivery and takeout options have expanded, making these establishments one-stop destinations for both good beer and great eating. Beer enthusiasts definitely have an abundance of options.

Until January 8, 2021, in line with the public health order updated on December 7, non-essential travel into and out of BC is not recommended. BC residents, let’s do our part by continuing to stay local and support local with our immediate household, in accordance with the latest guidelines. 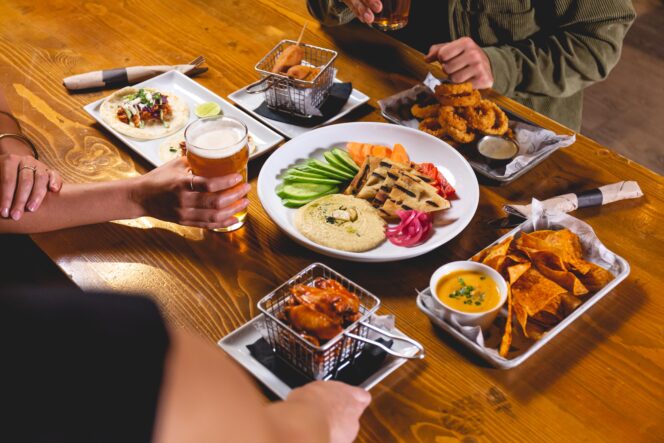 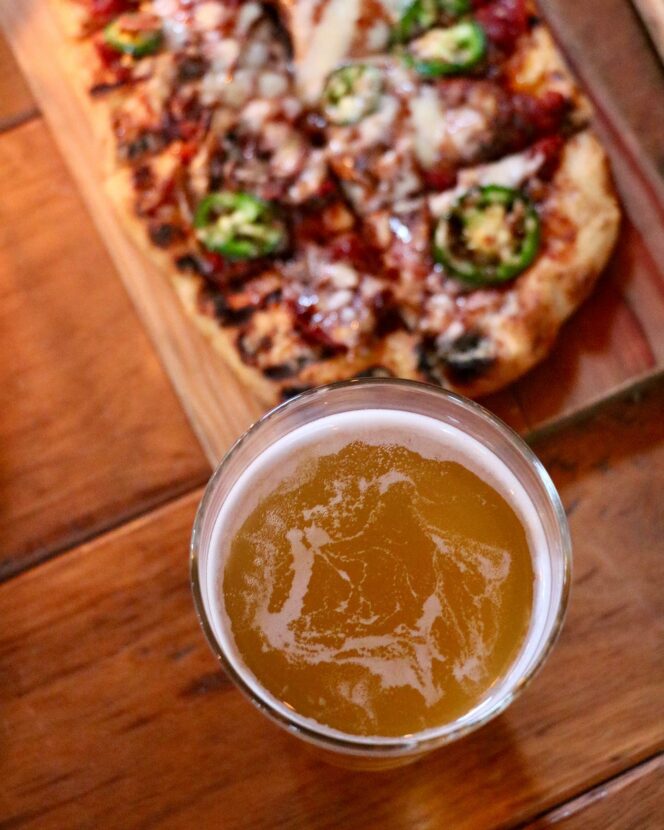 The magnificent Settlement Building is an example of an ingenious use of space. The building houses Vancouver Urban Winery, as well as the Settlement Brewing Manufacturing Collective, in addition to the restaurant Belgard Kitchen (55 Dunlevy Avenue). Settlement Brewing, which originally began as Postmark Brewing, has shifted to become a Collective by which cider and beer companies (e.g. Paper Brewing Co.) can also contract tank space. 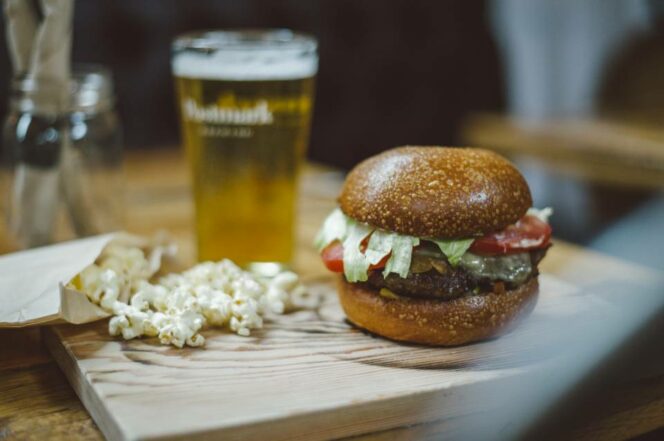 Belgard Kitchen offers lovingly crafted food that focuses on fresh, local ingredients. Bites that are available for dine-in as well as takeout/delivery include avocado hummus with crumbled feta, fresh mint, extra virgin olive oil, and seasoned pita; and mushroom and bacon pâté with pickled mushrooms, smoked bacon, grilled sourdough with confit oil, and crostinis. More substantial offerings include the Belgard burger with Cache Creek beef, aged white cheddar, caramelized onion, house red pepper relish, confit garlic aioli, leaf lettuce, seasoned tomato – all on a brioche bun and served with daily popcorn. In the restaurant, go for the tasting paddle, allowing you to try any four beers on tap, like the juicy “Good News” Hazy Pale Ale by Settlement Brewing or their Tranquilo Lime Lager with hints of coriander and tequila and a dry finish. Both are available for takeout as a 6-pack. 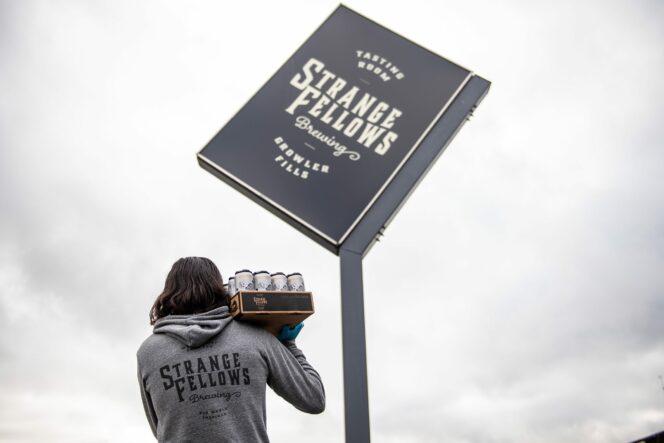 Located on Clark Drive, just down from the iconic East Van Cross landmark, Strange Fellows Brewing (1345 Clark Drive) wears its East Van identity with pride. Their name signals their willingness to be creative beyond the ordinary, with beer that melds the old (e.g. traditional Belgians) with the new and west coast (e.g. seasonal fruit beers). The tasting room showcases Strange Fellows’ strength in sours, with Philly the Tart and Roxanne, a black raspberry sour. Also on tap is the Talisman, a super flavourful West Coast pale ale; Blackmail, a Northwest stout; and Beldame, an Old World Pilsner — all of which evidence the broad range of styles that Strange Fellows brews. Delivery of select beers is possible for certain areas of Vancouver. 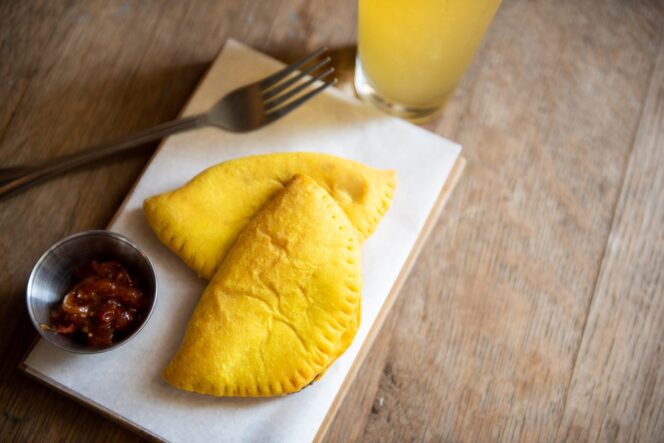 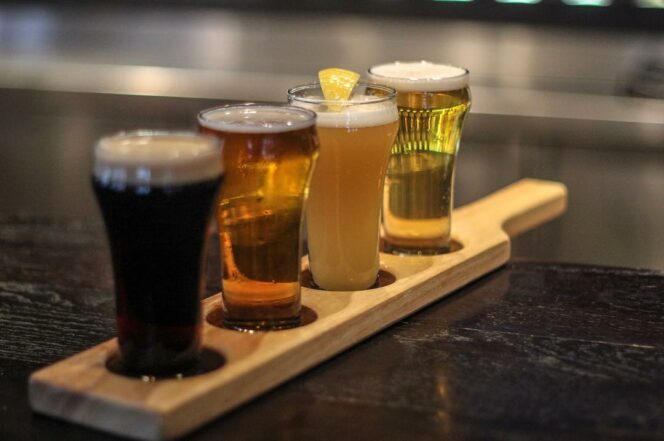 Part of the successful Mark James Group, the Yaletown Brewing Company (1111 Mainland Street) is the father of the brewpubs in the city, founded in 1994 back when Yaletown was still a nascent trendy neighbourhood. Its large inviting space, excellent selection of drinks, and extensive food menu have made it a consistent choice for Vancouverites for nearly three decades. You can choose from 8 craft beers on tap, 4 flagship beers that are always available (e.g., the very drinkable 604 Lager) and 4 seasonal beers (e.g., the refreshing Lemongrass Thai-PA with hints of pine and a floral hop aroma). The taster 4 pack (with 2 oz. servings) is a good way to take a tour of what’s on tap. 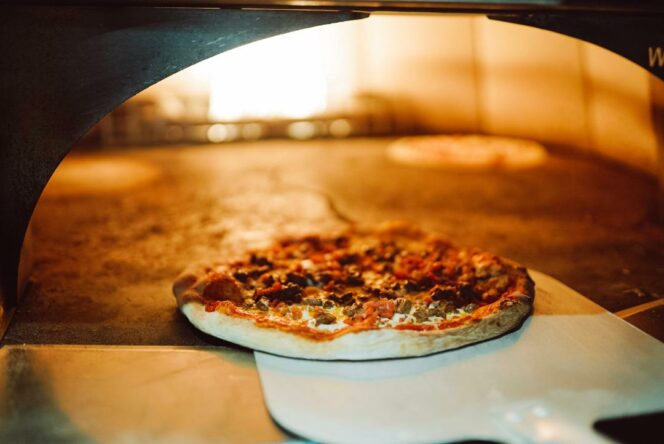 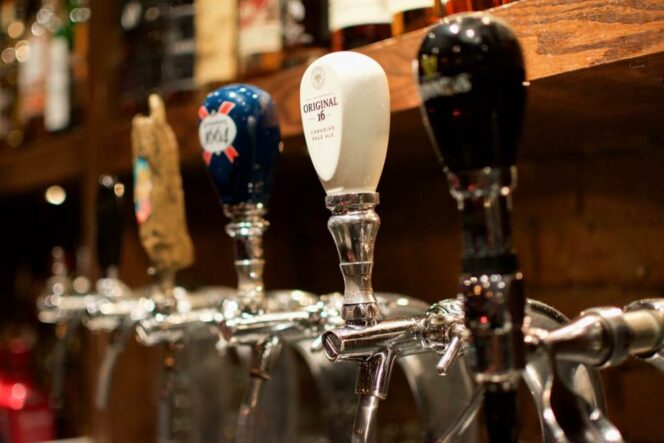 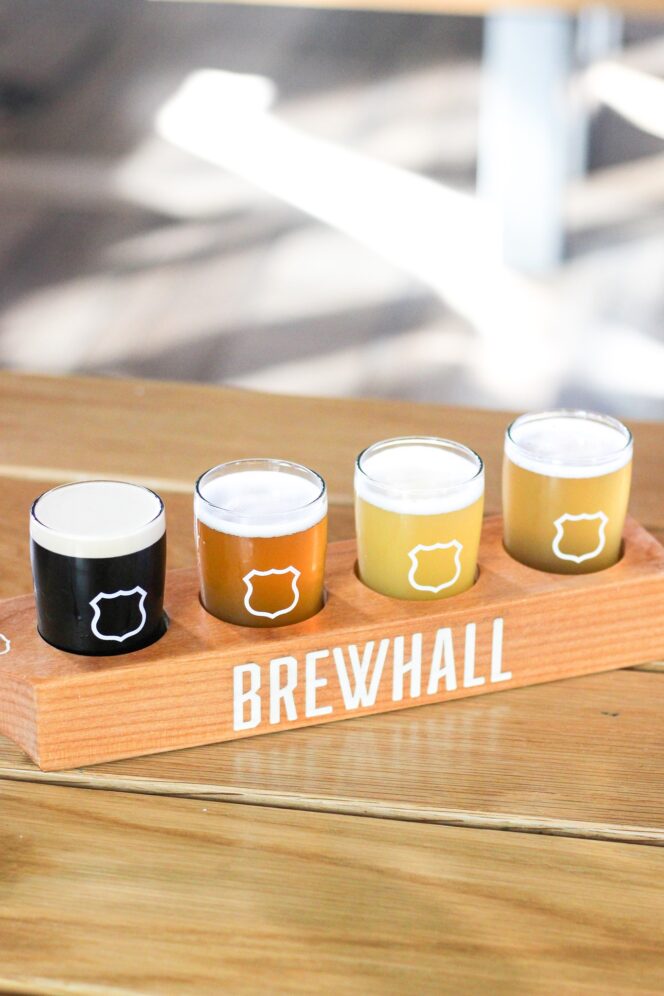 The lofty ceilings of BREWHALL (97 East 2nd Avenue) give the space an impressive grandness, while still retaining a welcoming accessibility. The aim of BREWHALL is simple: to offer a fun experience with great food, and of course, great drinks, including 22 craft beers and ciders on tap, with 8 of the beers made on site and other rotating guest taps (e.g., North Point’s whiskey hazelnut porter; 33 Brewing Experiment’s blood orange gose) also making an appearance. Currently on tap, you can find the BREWHALL Neon Lights Pale Ale (a 2019 BCBA Hazy Beer Winner), BREWHALL’s Azedo Tropical Sour (2019 BCBA People’s Choice Award), in addition to the limited release collaboration with Superflux, the Days Like This DIPA with tons of fruity notes, like passionfruit and pineapple, and a citrusy finish. 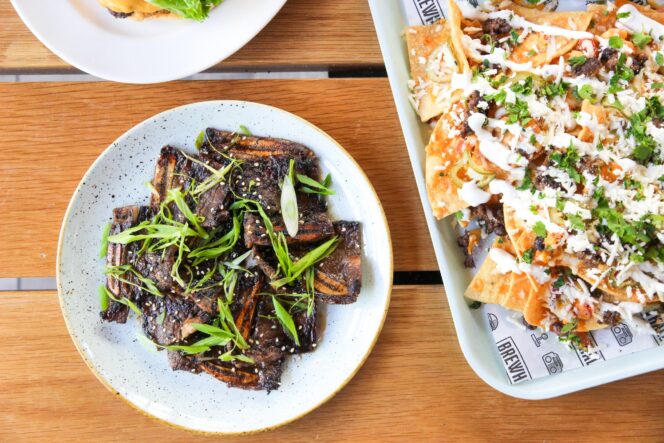 The food menu is designed to be comforting and tasty, with a commitment to the fresh and the local. Shareables include tender, flash-grilled Maui ribs with a tropical soy glaze, green onion, and sesame seeds; fully loaded nachos with a cheddar and mozzarella blend, corn and black bean salsa, pickled jalapeños, cotija, cilantro, and valentina – topped with sour cream; and a pound of chicken wings (Frank’s Hot, salt and pepper, or Korean hot). There are numerous delicious burger options, like the awesome Big-Stack burger with two hand-smashed patties, a three-part bun, onions, double cheese, pickles, shredded iceberg, and secret sauce. Healthier options include the Mediterranean chicken salad with garlic chicken, quinoa and kale tabouli salad, dates, tahini yogurt, feta, za’atar, almonds, and lemon.

Delivery and takeout options are available. 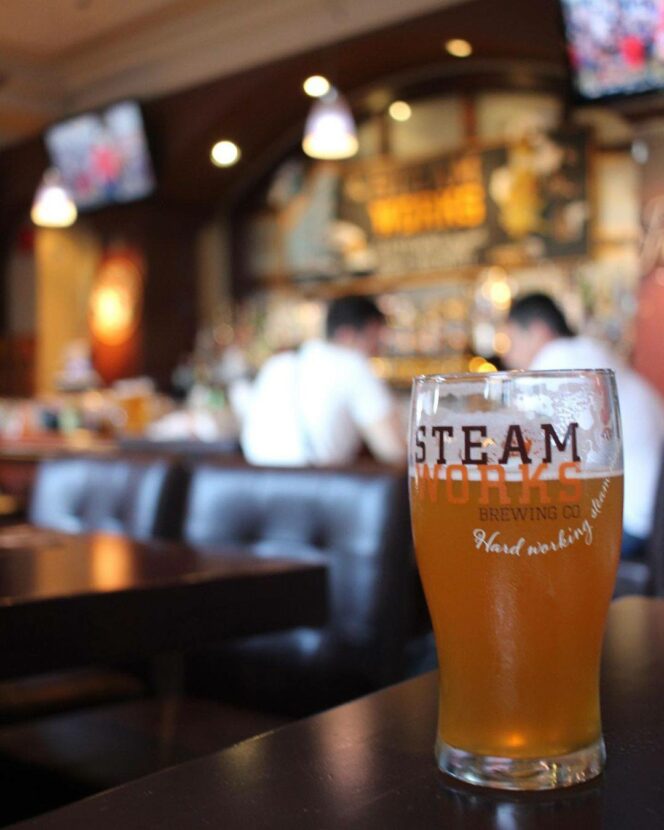 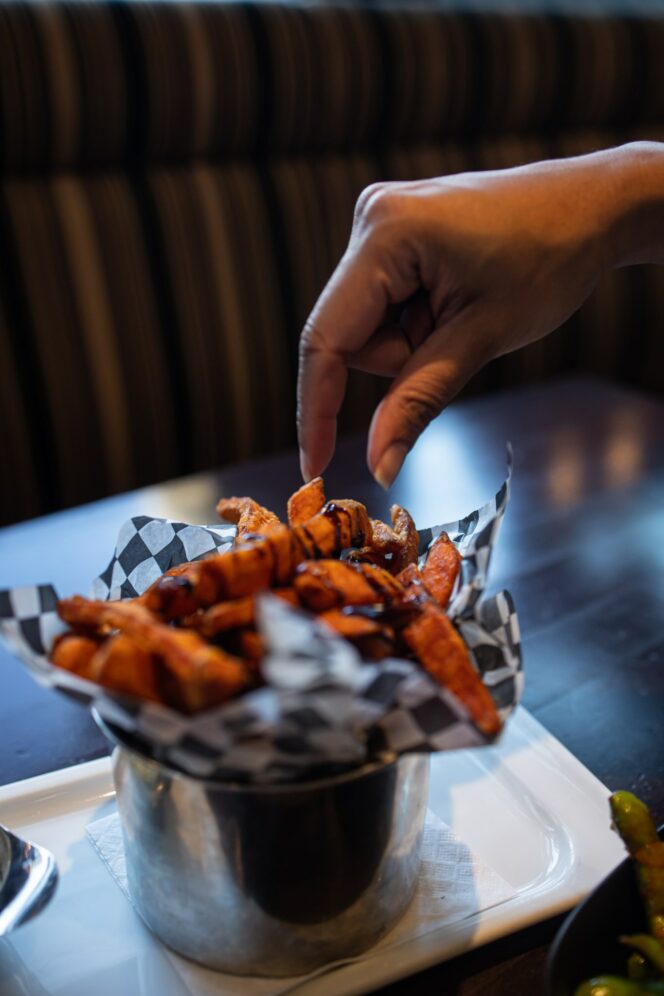