For those not familiar with these cinematic masterpieces, A Christmas Prince is part of a genre of holiday romantic comedies that offers a narrative that is formulaic but oh so satisfying. And these movies usually end in, you guessed it, a marriage proposal.

Vancouver TheatreSports, never shy about skewering our deepest held holiday traditions, is running a show that is bound to make you laugh–but also, wonderfully, make you believe in the romance of the holidays.

In a spoof on A Christmas Prince, this year’s Merry Kissmas show is set in Provdovia, a mythical kingdom located somewhere (the details are deliberately fuzzy) in Europe. The show begins with short TheatreSports games/skits that centre on absurd Provdovian Christmas rituals and fables (e.g. the Christmas Squirrel) that will often be referred to in other skits later in the show. 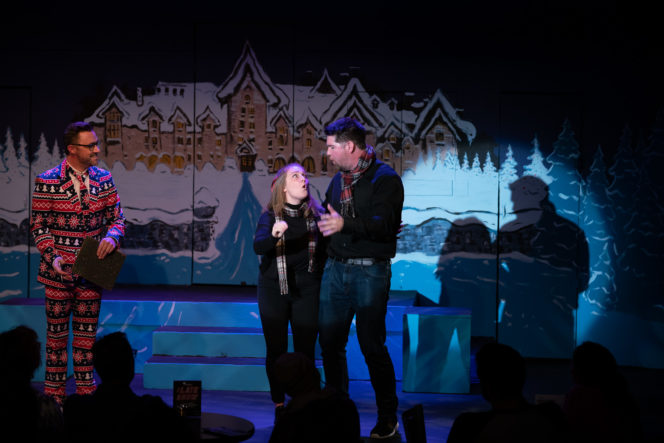 For my performance, Margret Nyfors was the hilariously wry host, presiding over other troupe members. And in true improv fashion, the skits rely on audience participation and suggestions, so every performance is hilariously unique. Improv really showcases the talent of the actors since they need to have lightening fast comic skills at all times.

However, on the night that I attended, it wasn’t just belly laughs at the cheezy promise of Hallmark Christmas movies. At the end of the first half, a couple was invited up on stage for an improv reenactment of their first meeting (the couple got to honk or ring a bell depending on the in/accuracy of the depiction). And then, as the troupe was in the middle of performing awkward salsa dancing at SFU on Burnaby Mountain, something magical happened.

[Bated breath] The guy got down on one knee, produced a ring, and proposed. And she said yes! And we all shed tears of joy.

Now, you can’t expect a real live proposal every performance, but this one was an indication that anything can happen at an improv show. And, of course, this proposal was particularly fitting given the theme of Merry Kissmas.

The second half of the show involves an extended skit tracing the arc of A Royal Romance, culminating in a Provdovian wedding between a commoner (aka an audience volunteer) and a member of the Provdovian royal family. The troupe cleverly satirizes rom-coms’ contrived obstacles to love and then wraps the story up with a tidy holiday bow, complete with a royal wedding, resplendent with pomp and ceremony. 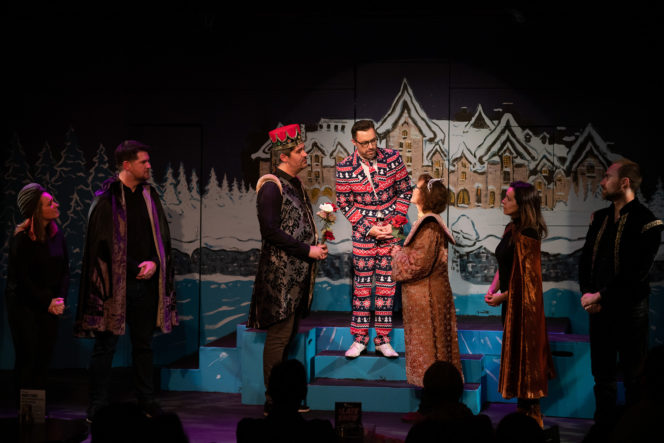 The whole night is a highly enjoyable mix of zany hilarity and impressive improv wizardry, with a dash of holiday wonder thrown in. I left strangely affirmed in the belief that holiday romance does exist after all, most especially in Vancouver TheatreSports’ Provdovia.